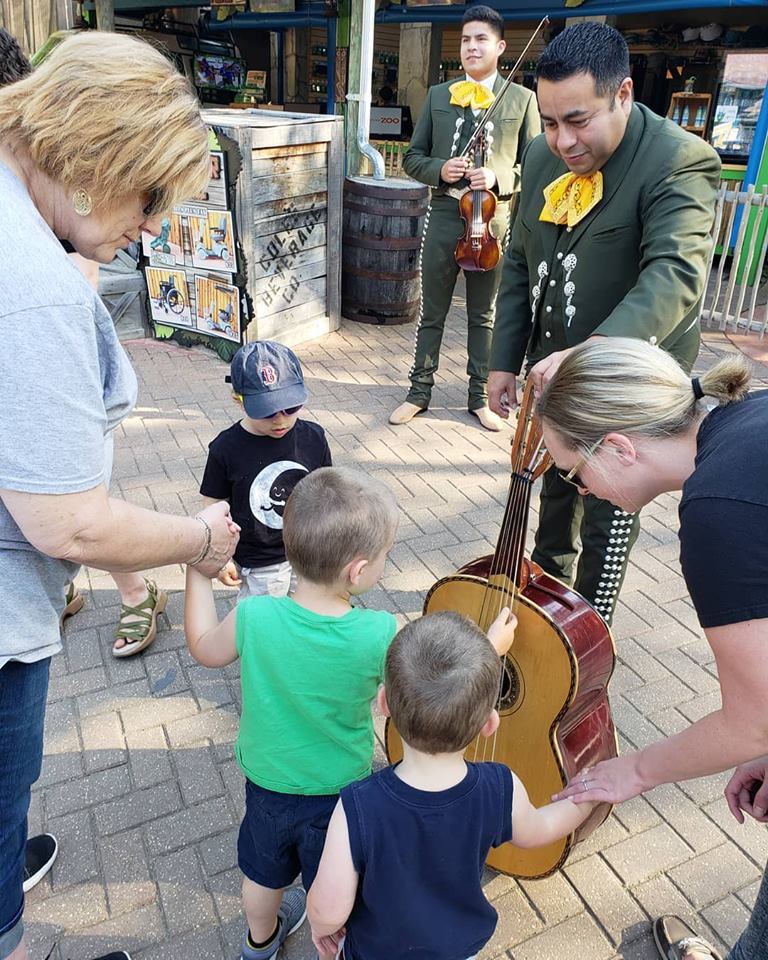 In the Mariachi sphere, Miguel Guzman, is a renowned Mariachi musician and educator, with 34 years experience as a professional musician and 29 years as a Mariachi educator. Violin is Guzman’s primary instrument but he is also fluent in vocals, guitarron, vihuela and guitar . Guzman’s musical schooling has its origins in trumpet, under Dr. Joseph Bellamah and classical violin under Genaro Ybarra and Cleo Aufderhaar of the San Antonio Symphony. Guzman also studied voice and composition under Iren Liden and Alice Gomez of San Antonio College. Born and raised in the culturally vibrant city of San Antonio, Guzman’s musical focus inevitably turned to Mariachi at the invitation of a high school band companion and Juan Ortiz of Campanas de America.

In his early career as a Mariachi musician, Guzman’s training comprised of participating in mariachi conferences and workshops as a student. His aptitude and expertise however, has been realized teaching and playing alongside the very same Mariachi groups he learned from at these conferences. This includes the genre’s top groups such as Mariachi Vargas de Tecalitlan, Nuevo Tecalitlan and Mariachi Los Camperos among others. Guzman is a repeat instructor and performer at conferences such as the Tucson International Mariachi conference; Albuquerque Mariachi Spectacular; Guadalajara’s El Encuentro de Mariachi y Charreria; TMEA regional state clinics; New York Mariachi Conservatory and the Chicago Mariachi Project. This experience afforded Guzman the rare opportunity to train, teach and study under some of Mariachi’s most notable and skilled musicians, namely Rigoberto Alfaro, Jesus Guzman, Nati Santiago and Nati Cano – a recipient of the National Endowment for the Arts.

As a public school Mariachi educator, Guzman taught pk -12 with San Antonio ISD for 26 years. He taught and directed community Mariachi with the Guadalupe Cultural Arts center. Guzman has also taught or directed Mariachi at OLLU, San Antonio College, Texas Tech, UTRGV and Texas State. He currently directs and teaches all Mariachi instruments at the Miguel Guzman Mariachi Conservatory. Regardless of age, skill, ability or socioeconomic makeup, Guzman always manages to develop award winning Mariachi programs, earning top honors and recognition through out the US.

Presently, Miguel Guzman is the co-founder and musical director of San Antonio’s premiere Mariachi Los Galleros where he continues to cultivate and elevate Mariachi as a proper art form. Most currently, Guzman has been added as a lecturer in the School of Music at Texas State University.

At the core of Mariachi Los Galleros’ armonía is Vihuela player, group manager, and co-founder, Ismael Alatorre. Reflecting on his twenty-eight years as a mariachi musician, Ismael says that his love for Mariachi grew through his family’s support and awareness of his cultural heritage. His musical life began after enrolling for a middle school mariachi class in the San Antonio Independent School District. Within a brief period, his enthusiasm and tireless passion allowed him to become part of the S.A.I.S.D. All-District Mariachi. Forming part of this prestigious ensemble afforded access to multiple experiences that would influence the course of his life. There he began to attend international mariachi conferences and festivals both in the United States and Mexico, winning accolades and sharing the stage with such renowned mariachis as; Mariachi Los Camperos de Nati Cano, Mariachi Nuevo Tecalitlán, Mariachi Cobre, and Mariachi Vargas de Tecalitlán.

Immediately completing his education at Highlands High School, Ismael found himself with the desire to continue to impress future generations with the knowledge he gained from his experiences. Following in the footsteps of his mentor, Richard Ramírez, he took a position as a mariachi instructor at Rhodes and Harris Middle Schools as well as a consultant for the S.A.I.S.D. All-District Mariachi. When enrolled at the University of Texas-Pan American, Ismael was able to contribute by recording on Mariachi Aztlán’s first full-length album, “Regalame Tu Cariño.” While there Ismael nurtured a life-long mentor/mentee relationship with one of the world’s greatest mariachi vihuelists, Victor “El Pato” Cardenas of Mariachi Vargas de Tecalitlán.

In 2006, Alatorre and business partner Miguel Guzman founded San Antonio’s premier Mariachi Los Galleros With Mariachi Los Galleros, Alatorre has performed for former President Bush’s private family events, on several occasions accompanied world-famous tenor Placido Domingo alongside the San Antonio Symphony. Alatorre and Los Galleros have appeared on the Today morning show and Fox and friends. Due to the national exposure as a member of Mariachi Los Galleros, Ismael is continually asked to serve as an instructor at the most recognized mariachi festivals and conferences that he once attended as a student. Including the New York Mariachi Conservatory, the Mariachi Vargas Extravaganza (San Antonio), FESTIBA at the University of Texas Rio Grande Valley, and the forthcoming University of Texas Mariachi Camp (Austin).

Currently, Ismael Alatorre is completing his ninth year as a police officer at the Alamo Colleges Police Department. He has also served as an officer at the Incarnate Word Police Department and Bexar County Sherriff’s Office.
Ismael acknowledges that his success has come from the privilege of studying under some of the most prestigious figures within the international mariachi community. He believes that direct guidance and tutelage are vital in the transmission, understanding, and conservation of mariachi music. Wherein Ismael has served as a crucial link in the generational diffusion of this musical art, mentoring and inspiring countless youth in San Antonio and the greater Texas area.

Gabriel began his trumpet education in band, but was eventually drawn to Mariachi music. He ascribes this to the strong cultural, familial and social influence of this genre.

Alatorre began playing professionally since age 16, paying his dues as a troubadour musician but ultimately working with established groups in the San Antonio and Austin Mariachi scene. His Mariachi experience includes studio, television and live acts. Alatorre has also been a recurring instructor at the Mariachi Extravanganza for 6 years, teaching under the direction of Mariachi Vargas. Also notable is that Mr. Alatorre is a Texas certified teacher with a Bachelors and Masters degree in Science.

Gustavo proudly boasts more than 25 years honing his craft. At his mother’s behest, Solis began studying Mariachi music in 7th. grade in San Antonio. Solis, however, recounts that his love of Mariachi music began the summer before high school. That is when he had the distinct privilege of first studying with members of world renowned Mariachi Vargas de Tecalitlan. It was a “life changing” experience that Solis cherishes and credits as a catalyst toward his passion for Mariachi music. Since then Gustavo has performed throughout Texas and the US, adding his vocal and guitar skills as a live and recording musician in many venues.

Solis’ most memorable performances have been at the Hollywood Bowl, the Astrodome opening up for Selena and taking part in a Mariachi European tour.

In a family where all his brothers are musicians, he attributes his original Mariachi apprenticeship to his grandfather and his uncle.

Pasalagua’s Mariachi career spans more that 33 years, during which he has worked and collaborated with some of the genre’s most recognized pioneers. While violin and vocals are his primary focus, Arturo is also adept at Vihuela and Guitarron. Pasalagua’s Mariachi distinctions include working with Jesus Rodriguez de Hijar of Mariachi America, Juan Pinzon formerly of Mariachi Vargas, Jose Hernandez of Sol de Mexico, Mariachi Cobre, 11.years at Disney Epcot and touring with Rocio Durcal from 1999 to 2000.

Throughout his three decade long Mariachi circuit, Pasalagua has worked as a clinician, TV and studio musician, and has performed with symphonies.

The Guitarron is an intrinsic element of an authentic Mariachi ensemble, which makes Noel Gamez an integral member of Mariachi Los Galleros.

His Mariachi education did not begin on the Guitarron, however. Gamez started on violin in 6 th grade, but after a year, took up the Guitarron and has amassed over 25 years experience as a mariachi musician. Gamez credits his grandfather Chavel Cavazos, South Texas Conjunto celebrity, with inspiring him to pursue a career in music. Gamez also plays the guitar and the Vihuela.

Among Noel Gamez’s accomplishments is touring with Manuel Vargas, formerly of Mariachi Vargas, accompanying Pablo Montero through out the US. Another feature in Noel’s Mariachi experience is touring the Caribbean island of Puerto Rico.

Throughout his Mariachi journey, Gamez has been an accomplished performer, instructor and studio professional. Although a musician for ove

On Violin and vocals, Mariachi Los Galleros enlists Miguel J. Guzman, who initiated his violin studies at age 7 with his father.

Mariachi music surrounded him since birth; it was the world in which he was raised. So true to form, Guzman has continued his Mariachi, violin and vocal instruction through to college and now as a member of Los Galleros. Miguel is also skillful at Guitarron and guitar.

Among his most notable instructors are his father Miguel Guzman, Edwin Origel of Nuevo Tecalitlan, Steeven Sandoval of Mariachi Vargas and Jesus Guzman of Los Camperos.

Guzman joined Galleros in 2013 at age 17 where career highlights include accompanying Placido Domingo and appearing on the Today morning show in New York City. His desire is to help usher Mariachi music to larger mainstream audiences while preserving its authenticity and integrity.

Molina is a proud product of what has become highly recognized, award winning Mariachi programs in the Rio Grande Valley Texas. He undertook Mariachi violin instruction from 5 th grade throughout high school and continues his music education at the University of Texas at Austin.

Molina credits members of Grammy nominated Mariachi Los Arrieros del Valle for his foundational education in Mariachi music. Mariachi Sol de Mexico and Mariachi Cobre are the source for inspiring Patricio to pursue performing Mariachi music at higher levels. He has garnered experience traveling throughout South Texas, performing with many Mariachi groups and co-founding his own.

High points in Molina’s musical trajectory include participating in the 24 th Annual Beijing International Tourism Festival and getting selected for the Master Class at Albuquerque’s 2018 Mariachi Spectacular.

When still in 3 rd grade Antonio joined the award winning middle school Mariachi. Raised by musicians, Guzman grew up listening to diverse genres of music and was taught the fundamentals of voice and violin very early on.

Among Antonio’s most celebrated Mariachi experiences is singing at the Denver Stock Show and Rodeo as an invited soloist and assisting at the Texas Tech Mariachi Camp 2018 under the direction of Jesus Guzman.

At the outset, Sergio Martinez began trumpet in middle school band and remained a band member through high school, participating in both concert and marching band.

Inevitably, Sergio also joined his middle school Mariachi in 7 th grade and continued beyond high school. Witnessing the emotional reaction of Mariachi audiences, at both celebratory and sorrowful occasions is what drew Martinez to the genre. Throughout his 14 –year career, Sergio has worked with some of South Texas’ most recognized Mariachi ensembles and has collaborated as a studio musician.

Most memorable for Martinez was the opportunity to travel to China, representing Mariachi Music at the 24 th Annual Beijing International Tourism Festival and teaching at the University of Texas Austin 2018 Mariachi Summer program.

Stay informed of our upcoming events and performances by opting in to receive our newsletter.

You have Successfully Subscribed!